Informations by EMMANUELPosted September 7 | 11:49 AM

Before naming a very famous spirit, Cognac is a city situated in the South West of France. It’s the Charente’s second biggest city. The cradle of cognac is promoting the activities around the city’s historical heritage.

Cognac is mainly known for its spirit. Yet it isn’t the only town’s asset. Cognac has a lot to offer with a heritage that goes far beyond the spirit.
The city history goes back to the Middle Age with the salt trade. At that time, people living in Cognac sailed back up the Charente to supply the city with salt. This industry has lasted for five centuries. Cognac port has allowed the city to develop its activity even before the beginning of wine trade.

Cognac during the Middle Age

During the Middle Age, between the 11th and the 13th century, the city has experienced a significant development thanks to the Charente river and around three neighborhoods: Saint Léger area, the castle area and the port. The buildings made to protect the city has been built during the 13th century. We can still see some part of it such as the St Jacques towers.

Cognac during the Modern Age

The reign of Jean and Charles d’Angoulême was a very prosperous time for Cognac. Buildings were renovated, many churches and cultural institutions were built. The spirit trade began and has largely participated to the city development. It’s also the time of the birth of French king François 1st in Cognac castle. You can see an imposing statue on the Francois 1st place in Cognac, celebrating the Marignan victory in 1515.

During the 19th century, the city of Cognac has begun another important building strategy. Thanks to the cognac trade momentum, the town has known a huge development and has grown six-fold. Cognac’s population went from 3,000 to 18,000 inhabitants in 70 years. Several parks were built: City Hall’s garden, Francois 1st park, Bois du Portail. During the 60’s, Cognac grew bigger with new residential areas. In 2017, Cognac’s conurbation counted 26,500 inhabitants.

The spirit is an essential element of Cognac’s identity. Its making is based on long traditions transmitted from generation to generation. Several economies have emerged around the spirit: glassmaking, cooperage, printing, packaging…

From the 19th century to the end of the 20th century, cognac trading has largely influenced the city’s architectural style. Cognac’s big brands marked their presence by building several new buildings such as private mansions and ageing cellars.

Cognac is made from a double distillation in a Charentais still. This process is specific to cognac.
From the vine plant to the tasting, cognac making is based on several stages:

The cognac community’s identity is based on the empiricism, the experience and the oral transmission. Cognac’s trade culture was developed during the 16th century by foreign merchants from the Netherlands, the UK or Norway. The union between this trading a culture and the vine knowhow has formed a multicultural community. Cognac is a result of a collective work gathering many different knowhows with their own methods.

Cognac can only be commercialized once it has aged for at least 2 years in barrels. The ageing indications are written on the labels.

For more information you can check our article about the different cognac quality grades, how to choose the best cognac and discover our Cognac Grande Champagne.

Community and individuals related to the cognac economy

The cognac community is composed of many different actors that share the same passion and culture. They all work together to produce and sell this unique spirit.
The first actors working in the cognac community are the one working directly with the wine, the raw material. They are at the heart of the economy. It goes from the vine work to the eau-de-vie blending by the cellar master, including of course the distillation. According to the BNIC, this represents more than 4280 people in 2018 with:

Today, there are more than 271 cognac houses (family one or belonging to big brands) working closely with winegrowers. Hennessy (LVMH), Martell (Pernod-Ricard) and Rémy Martin (Rémy Cointreau) are the biggest companies of the cognac industry.

The other actors are the one working directly with the winegrowers. These jobs have appeared along the methods evolution: oenologists, nurserymen, agronomists, brokers, coopers, agricultural machinery manufacturers…
Many people are also working on packagings: glassmakers, glass decorators, cork makers, box makers, designers…

All these jobs represent about 17 000 people.

Pineau des Charentes is a wine made from liquor. It’s the result of blending grape juice and cognac together, before ageing it all together for several years.
There are different types of Pineau des Charentes: white, rosé or red. The red one is characterized by its fruity notes such as redberries. The white Pineau des Charentes has nuts, vanilla and honey aromas. Pineau des Charentes is mostly drunk for summer, chilled, in cocktails or on ice.
The very old Pineau needs to be aged for at least 10 years in oak barrels. It goes very well with Roquefort cheese or fois gras.

Find out more about Pineau des Charentes and discover our products.

Cognac is not only a place producing cognac. Many other spirits are produced here, the region is even called the “Spirits Valley”. You can find gin (G’Vine, Citadelle), vodka (Ciroc, Grey Goose), rhum (Plantation) or Grand Marnier.
According to IWSR, 50% of super-premium spirits (+ than 30€ a bottle) consumed in the world comes from Cognac region.

Besides cognac and other spirits, you can also find wine from the region. Wines produced in Charente and Charente maritime are called Vins de Pays Charentais.
The grape varieties used are: 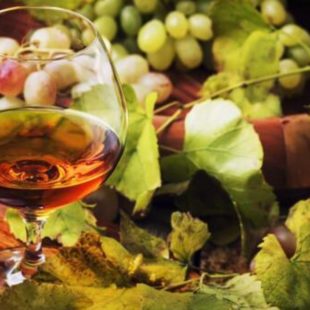