What grape varieties are used to make the Cognac eau-de-vie? 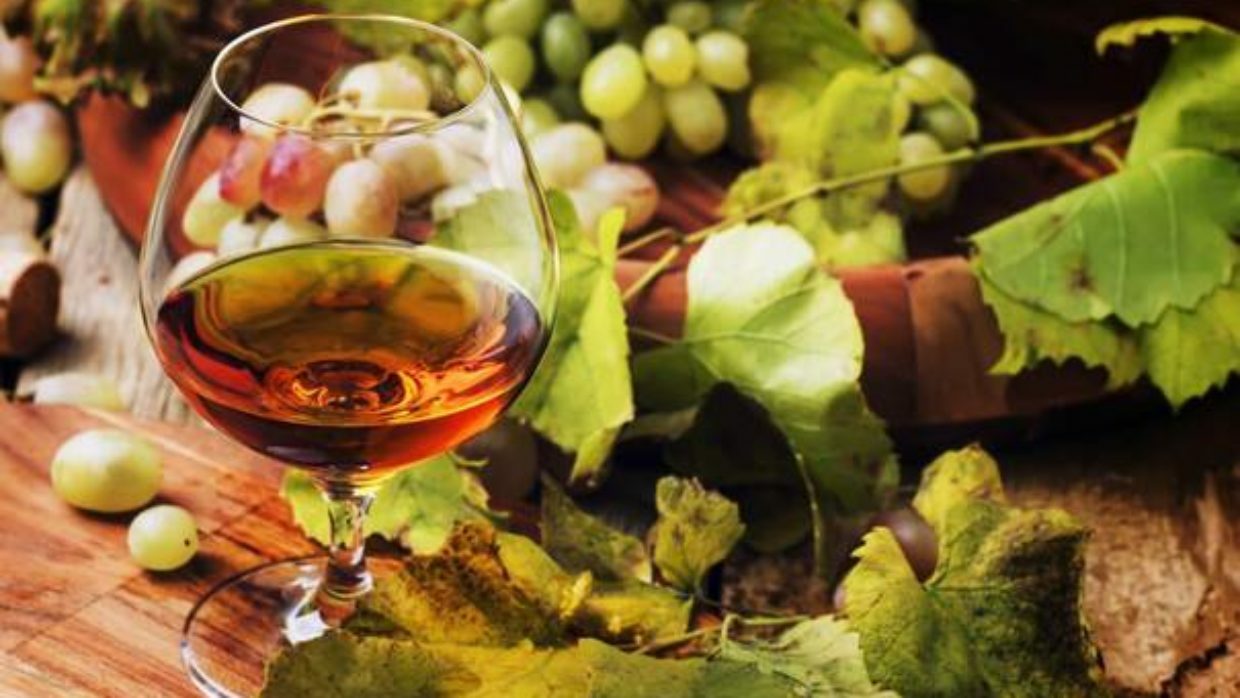 Produced in French department of Charente and Charente Maritime, cognac is a spirit known all around the world. This eau-de-vie is 100% French and owes its great fineness to the mild, temperate climate and to the passion of the winegrowers since the 15th century. Nowadays, Cognac is exported and sold in more than 160 countries. Moreover, the cognac is officially a Protected Designation of Origin (called AOC in French), since 1936.

What is the AOC Cognac?

The Protected Designation of Origin of Cognac is only given to eau-de-vie from the delimited region that goes from the west of Charente Maritime to the east of the Charente. This area is based on the characteristics of the soils that influenced largely the aromas of the wine. Cognac is made of 6 different crus: Grande Champagne, Petite Champagne, Borderies, Fins Bois, Bons Bois and Bois Ordinaires.
Grande Champagne and Petite Champagne are easy identifiable bytheir fineness and floral aromas. In the Borderies the aromas are sweeter and round with a touch of iris and violet. The cognac Fins Bois is known for its quick aging whether the Bons Bois are valued for its fruity notes. Finally, the Bois Ordinaires are distinguished by their terroir taste specific to sandy soils.

There are several grape varieties used for the cognac eau-de-vie with different characteristics. The specifications of the PDO Cognac have listed the grape varieties allowed to produce wine for cognac. This list is composed of white grape varieties such as the Colombard, the Montils, the Folle Blanche, the Ugni Blanc or the Sémillon.
The Folignan can also be used partially according to the BNIC (Bureau National Interprofessionnel du Cognac) and represents 10% of vineyard maximum.

How to make the Cognac eau-de-vie? With which grapes?

Cognac is the result of a long process, from the vine to the bottling. The fineness of the cognac comes from the white grapes, especially with the Ugni Blanc. This grape variety is known for its high acidity level, its resistance to the climate and its low alcohol level. The grape harvests are done as soon as grapes reach ripeness.
Then comes the pressing to get the juice that will be fermented for 5 days. These steps are crucial for the quality of the eau-de-vie. This fermentation is going to transform the juice in wine. Once this fermentation is done, the following step is the wine distillation. The cognac eau-de-vie needs to be distilled twice. The first distillation gives the “brouillis”. It will be distilled a second time, this process is called “la bonne chauffe”. To make cognac, the process of distillation is strict and needs to respect a number of rules like the use of a Charentais still in copper with a specific boiler. The wine is then boiled in it. A “Hat” in form of an onion sits on top of the boiler. The alcohol vapours pass through a swan neck to reach a cooling pond. It’s important to note that each cognac big house has its own method of distillation.
New eau-de-vie is placed in oak barrels of 270 to 450 litres. Then begins the long stage of the ageing of the cognac. The environment has obviously an influence on the product: the level of humidity, the drought. Attention! The few contact with the air will increase the natural evaporation called “la part des anges” (the angels’ share) that will also lead to decrease the alcohol level. At the end of the ageing, the Cellar Master blends different eaux-de-vie together to get a single and unique cognac. This is a delicate and decisive step that requires a great experience to give the desired aromas and specific notes.

What says the regulations?

The regulations and rules around making cognac are particularly strict. The Bureau National Interprofessionel du Cognac (BNIC) is in charge of the controls. There are on top of that, an organization that delivers the Protected Designation of Origin called Certipaq. Indeed, 98% of the Cognac produced in France is sold on the international market: 31% of the production is exported to North America, 30% to the UK and 25% to Asia (mostly in Singapore and China).
China has imported 26.2 million bottles in 2017-2018 while Singapore has drunk more than 26.6 million bottles. With an annual consumption of 4.8 bottles, France is far from being the biggest consumer of cognac.
Note that more than 200 million bottles have been exported in 2018. The market produces a turnover of more than 2.6 billion euros. You should know that traditionally cognac is drunk as a liqueur but can also be enjoyed in cocktails with some tonic and ice. In the kitchen, the eau-de-vie is often used in the recipe of the pepper steak or for meals flambéed.

From the inside! Fin de campagne de distillation p